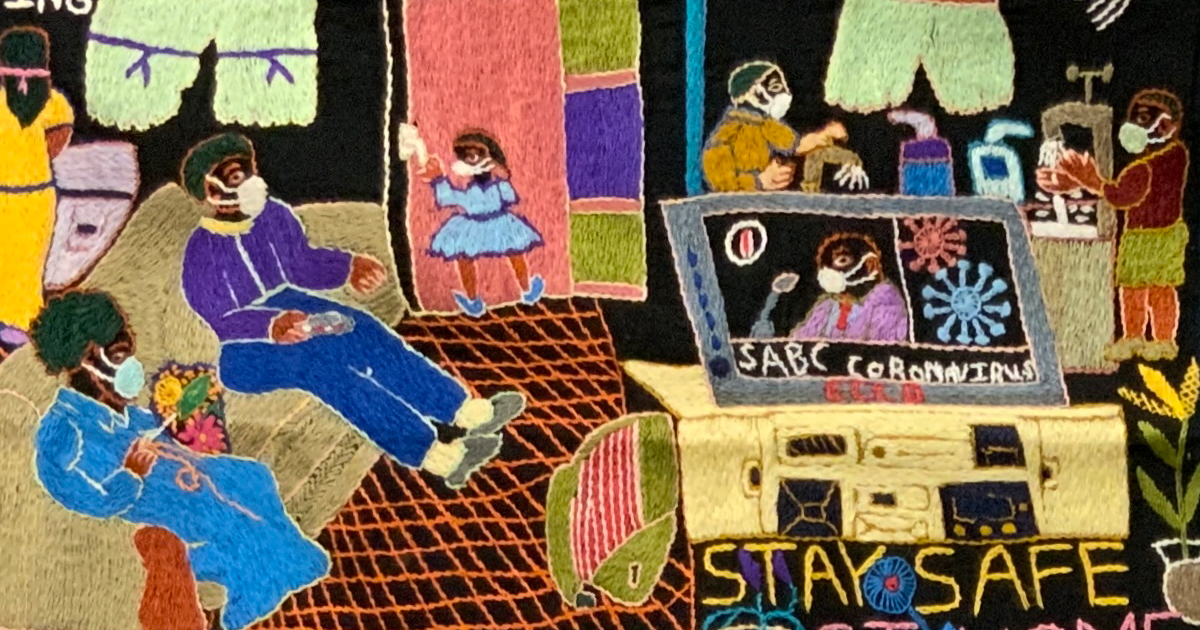 Since the Spring of 2020 women belonging to embroidery groups in South Africa and Chile have been representing how the coronavirus has affected their lives and that of their compatriots.

Located in the Winterveld some 40 miles north of Pretoria, the Mapula embroideries have as their basis pictures taken from newspapers and the internet coupled with the designers’ imaginations. Added are embroidered notes that refer to restrictions, explain scenes, identify figures, and issue advice. 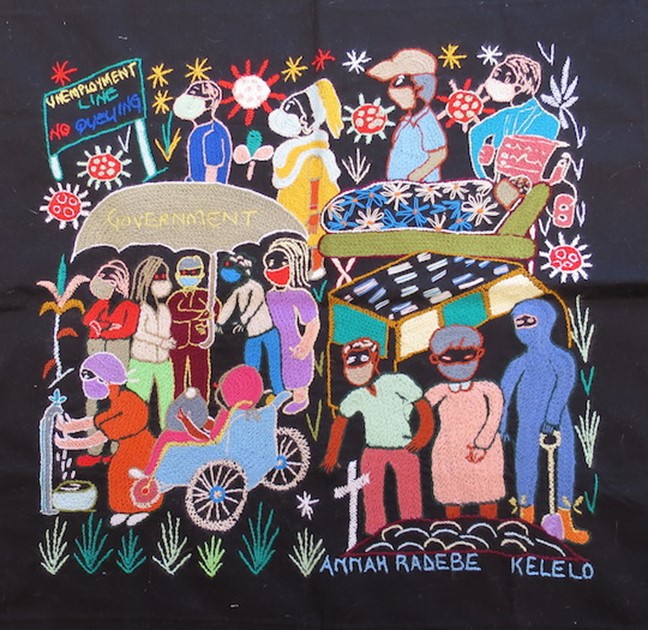 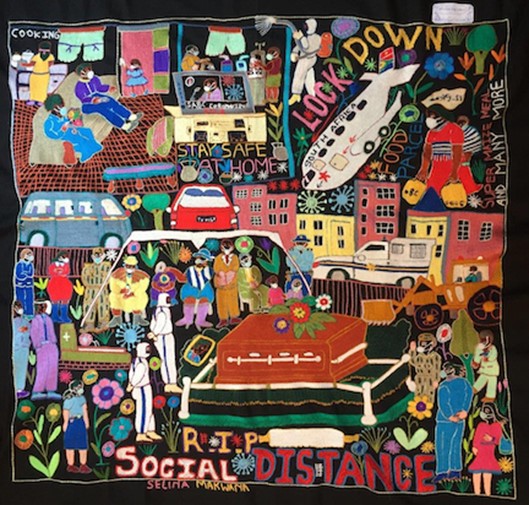 Many more details appear in Selina Makwana’s embroidery purchased for the International Folk Art Foundation collection at the Museum of International Folk Art, currently on display in the exhibit #mask: Creative Responses to the Global Pandemic in the Gallery of Conscience through January 15, 2023. Makwana uses half the cloth to illustrate a funeral. Among the mourners are a policeman and two soldiers who, in practice, were charged with seeing that the number of attendees did not exceed the government limit of 50 —a restriction instituted because funerals were a source of virus spread.

Interspersed between vegetation and images of the virus are:

Other Mapula COVID embroideries depict school closures, the arrival of Cuban doctors to staff hospitals and clinics, the prohibition of outdoor exercise and dog walking, plus the president and government ministers addressing the public. One embroidery even advises “Take care of COVID before it takes care of you.”

In an embroidery titled La Pandemia, the Chilean Patricia Huerta shows COVID patients in a hospital and arriving on stretchers. However, the work contains details the non-Chilean might overlook:

Kelelo Maepa (27) involved with Mapula since she was ten is now a designer, embroiderer, and translator (there are nine languages represented within the group). The mother of a four-year-old son, she has just completed a degree in Food and Beverage Operations from the University of South Africa.

Annah Radebe (51, mother of 3) worked for years in Pretoria as a domestic. After that job ended (2016), she returned to the Winterveld. Seeing a woman embroidering, she became intrigued and met with a Mapula group leader who taught her stitches. Within four years, she has become an expert embroiderer.

Selina Makwana (62, mother of 8) joined Mapula in 1993 and soon began to receive awards for her detailed embroideries worked in a variety of stitches. Her themes are among the most varied of the Mapula embroideries and range from household activities to political subjects. She completed the MOIFA piece in less than two months.

Patricia Huerta, Isla Negra resident and current president of the Bordadoras of Isla Negra, has been with the group since 1969. Her earlier embroideries focused on rural scenes; her most recent themes treat the people living in Chile’s far northern Atacama region.

Martha J. Manier, Ph.D., taught Spanish and Women’s Studies at Humboldt State University. Her translations of contemporary Latin American short stories have appered in journals, anthologies, and bilingual editions. Her 2019 book, Sewing Their Stories, Telling Their Lives: Embroidered Narratives from Chile to the World Stage (1969-2016), is available through Humboldt State University Press. Currently, she is a research associate at the Museum of International Folk Art.

#mask: Creative Responses to the Global Pandemic is on view in the Gallery of Conscience at the Museum of International Folk Art through January 15, 2023.