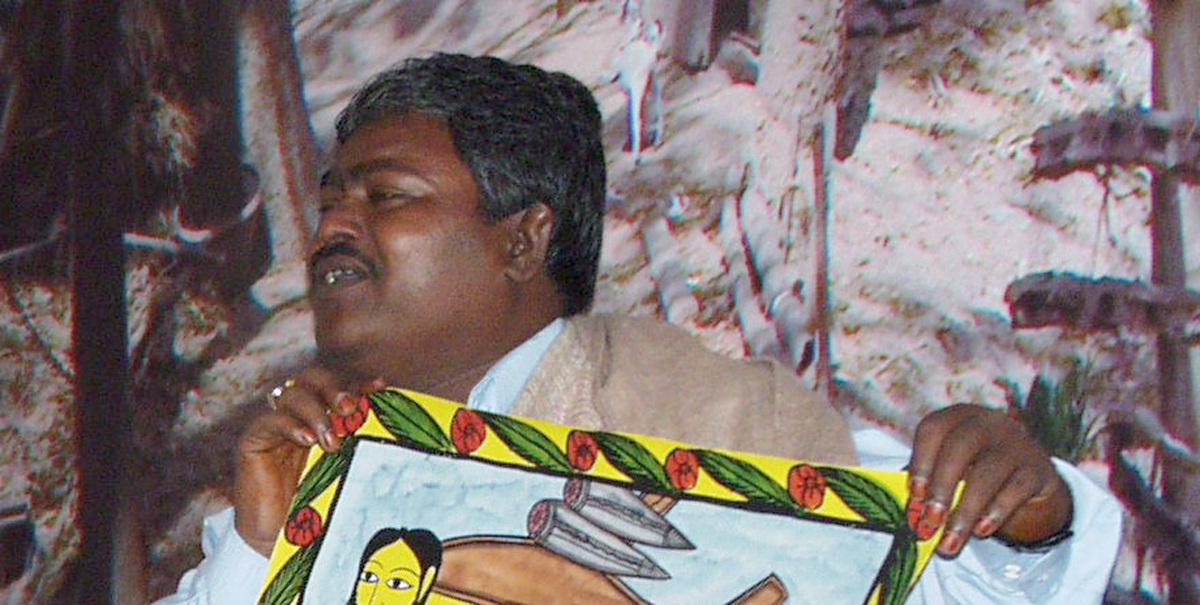 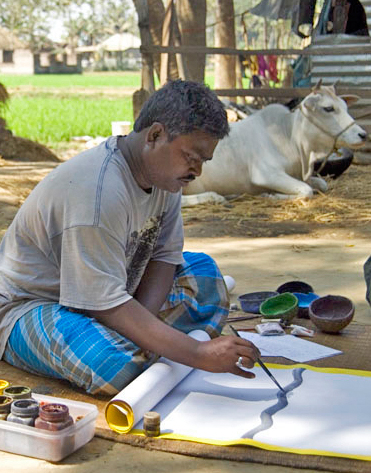 In December of 2001, still reeling from the catastrophic event that occurred on 9/11, I arrived in the village of Naya, after many hours on a local train from Howrah Station in Kolkata, then on the roof of an overcrowded bus for the last ten kilometers of my journey. The bus stopped in front of one of the two tea stalls in the village. A young man in his early thirties quickly approached me to inquire about my business. The moment I saw this man with glimmering eyes and a toothy grin, I knew there was something special about him. He had a commanding presence, with a loud and authoritative voice. In other words, he had charisma. His name was Gurupada, a native son of Naya.  Gurupada Chitrakar was the first person I met in the village, and that magnetic moment was the beginning of a long relationship between the two of us that would last for two decades, until his ultimate demise on June 29, 2021, when the coronavirus took him away from us much too soon.

We immediately took a liking to each other. He invited me to his house and introduced me to his extended family, then to the many other Patuas (scroll-painting bards) who lived in his hamlet within the village. He was the youngest of six children, and his five older sisters lived with their own nuclear families around him. His aging mother lived with him as well. All of them were involved in the business of composing narrative scrolls called pat, hence the Bengali slang term patua to refer to their traditional occupation. They, however, now prefer the fancier term Chitrakar (“picture maker”), which they have adopted as a caste title and surname. Although the name would suggest that they are Hindus, all of the chitrakars in Gurupada’s neighborhood actually claim to be Muslims, yet sing songs about Hindu gods and goddesses. They also respect Hindu customs and beliefs. As Gurupada always insisted, one has to be blessed by the goddess Sarasvati to be a good singer. 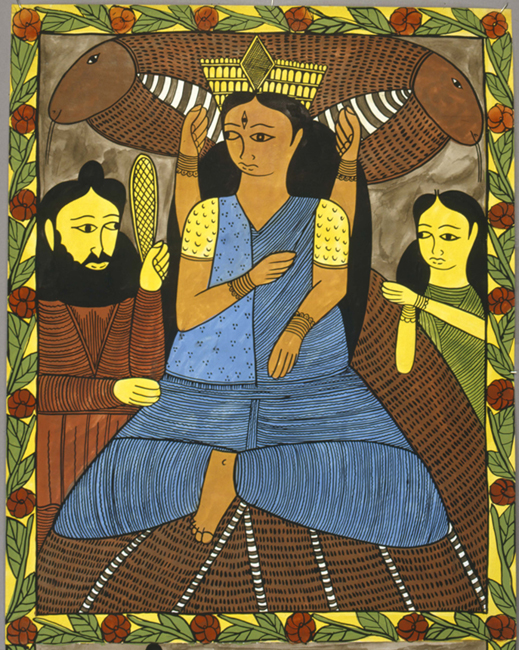 Although I was much older than he was, I surrendered myself to him for guidance about his lifelong pursuit of excellence as a painter and singer, since I was there to learn about the art of the Patua. Although I did a survey of his entire para (“neighborhood”) to get a numerical sense of the community’s demography, it was always Gurupada’s veranda where I ended up at the end of the day just to watch him paint and to hear him sing. He wasn’t the most experienced artist in the patuapara at that time, but he was definitely the most charismatic among them. He would sing while painting scrolls. We would sit for hours and chat, while he graciously shared knowledge of his tradition with me. Our friendship grew deeper and deeper each time I returned to Naya. Over a period of five years, I recorded him and the others sing, documented their painting techniques, and purchased scrolls that would ultimately lead up to a major exhibition at the Museum of International Folk Art in 2006 titled Village of Painters: Narrative Scrolls from West Bengal. An accompanying catalogue bearing the same name was also published by the Museum of New Mexico Press to coincide with the opening of the exhibition.

Thanks to generous support from the International Folk Art Foundation (IFAF), I was able to bring over two Patuas for a two-week stint as artists in residence. Naturally, Gurupada was one of them, while the other was a brilliant young female painter-singer named Swarna. The long journey by bus and train from Naya to Kolkata, then by plane to Albuquerque via Boston finally ended with our arrival in Santa Fe on time for the grand opening of the exhibition, which was well attended. Over the course of the next two weeks Gurupada enthralled his audiences with stories and songs. We travelled to schools and colleges in and around Santa Fe to perform and conduct workshops. They would speak and sing, I would drive and translate. Exhausted in the evenings, we would eat Indian food and talk until the early hours of the morning. Despite Santa Fe’s many charms, Gurupada always waxed poetically about home. I once joked that he could move to the Land of Enchantment and become a famous artist. He scoffed, responding that all he wanted out of life was enough land to be self sufficient, so that he could feed his family. 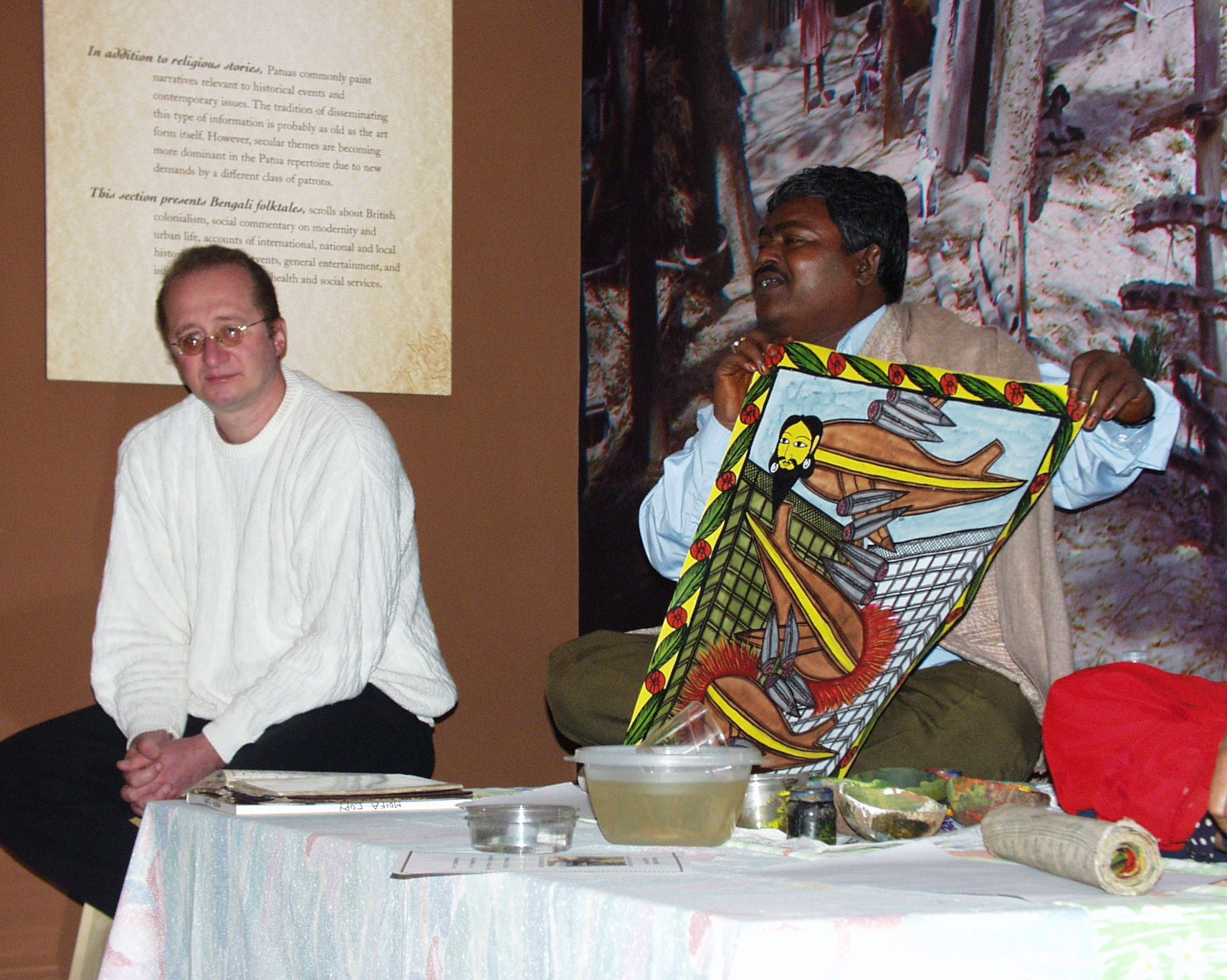 Even though he received many accolades, fame eluded Gurupada. He also worried about the future. Then the pandemic hit India, not so hard at first, but eventually spreading aggressively like wildfire. Gurupada got sick. Despite his illness, he continued to toil until the end, when he ultimately died of complications from the coronavirus. In his last interview conducted by a team of researchers from the Indian Institute of Technology in Kharagpur, West Bengal just months before his death, he stated that, “the number of Patuas has increased but the feeling of brotherhood has decreased. The number of painters has increased but the songs have decreased. The market value has increased but the sense of satisfaction has decreased. Back then, their market value was comparatively less but the idea of brotherhood amongst the Patuas was very strong.. People were poor then but they had an abundance of love. …So, with the increase in the number of Patuas, the sense of fraternity, the songs, everything seems to have diminished.” (http://www.dlb.iitkgp.ac.in/gurupada-chitrakar/)

Gurupada merged with the elements of the universe at the tender age of 53, leaving behind his loving wife and three sons. I call my homage to him a mahatmya (“panegyric”) because he deserves all of the praise that he can get.

Frank J. Korom is a professor of religion and anthropology at Boston University and a 2021 recipient of the Humboldt Prize. He was formerly the Curator of Asian & Middle Eastern Collections at the Museum of International Folk Art.

Watch a video of Gurupada Chitrakar performing his scroll about Coronavirus in October 2020 (by The Scrollpainters of Naya, Pingla; edited by Soumya Acharya): https://youtu.be/Xk-PG0Oea7U