Hamsas in Moroccan Folk Art as Seen in the Girard Collection 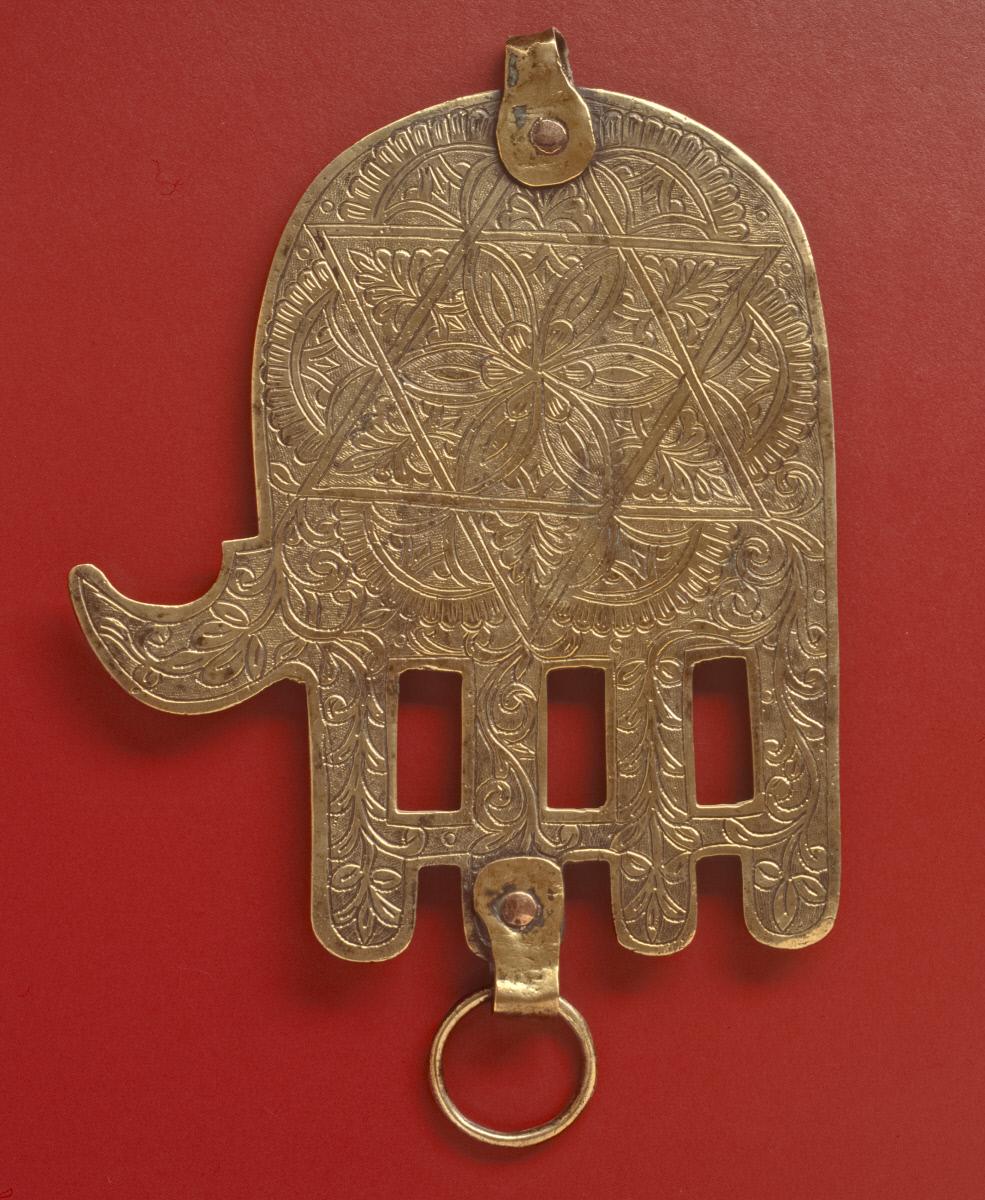 The hand is an ancient symbol seen across many cultures and religions. From the first paleolithic cave paintings of stenciled hands, 40,000 years ago in Indonesia, to the images of the Buddha's hand mudras, to the Sistine Chapel image of God creating Adam with the touch of his finger, it is universal and yet particular. The representation of the hand has always been a symbol of the profound connection of the sacred and the human.

Amulets, crafted objects made of various materials such as precious metals, gems, and even rocks, snail shells and ostrich egg shells, were and are worn as spiritual or physical protection to ward off evil and to ensure blessings throughout life cycles. The oldest have been dated to between 110,000 to 135,000 years. The use of the symbol of the hand as an amulet is, again, found across many cultures but is particularly strong in the Islamic and Judaic faiths in Northern Africa.

The Hamsa (Arabic Khamsa, Hebrew chumesh), meaning five, representing the five fingers of the hand, is thought to be pre-Islamic, possibly brought over by the Phoenicians, along with the Jews who were merchants. The Berbers, the Jews and the Muslims all adopted this powerful symbol. All three cultures coexisted in Northern Africa for hundreds of years, thereby facilitating cross cultural appropriations of symbols and artistic styles. Even though Islam forbids the use of amulets and charms, Moroccan folk practices derived from ancient Berber traditions use them extensively. It is thought that the Berber jewelers learned their jewelry making from the Jewish metalsmiths. In Judaism, it is forbidden to represent the human figure, though the use of the hand in amulets, as a powerful protection against evil through the use of folk practices, also overcame this law.

Seen in the hallway at MOIFA leading to Alexander Girard's Multiple Visions exhibit, his framed cases of amulets, ex votos, and talismans reflect his aesthetic by use of symmetry, multiplicity and pattern. As a whole, this display forms a stunning, eye-catching introduction to the rest of his collection, with design, folk art, religious items, universality, and particular cultures all encapsulated in one display.
In particular, I am attracted to the case of Moroccan amulets, the majority of which –19 out of 32 – are Hamsas. The other shapes are sacred symbols as well, representing frogs, round pieces with spirals to represent eternity, rectangular boxes that hold sacred writings from the Koran, and squares (Khatem) containing nine circles representing sacred numbers. Most of the amulets are made from silver, which represents purity with its lightness of color. All of them date from the late 19th century to early and mid 20th century. The older ones are simpler in design with mainly geometric symbols used. The newer ones are more elaborate in style, with representations of flowers, birds and lizards found in the designs. A number of them have a central design element, whether a flower, or precious stone set in the middle to represent the warding off of the Evil Eye. Many pieces found outside of this collection have eyes inscribed in the center for that reason. Carnelian is found in many pieces and is said to have been a favorite gemstone of Mohammad, symbolizing power, courage, action. 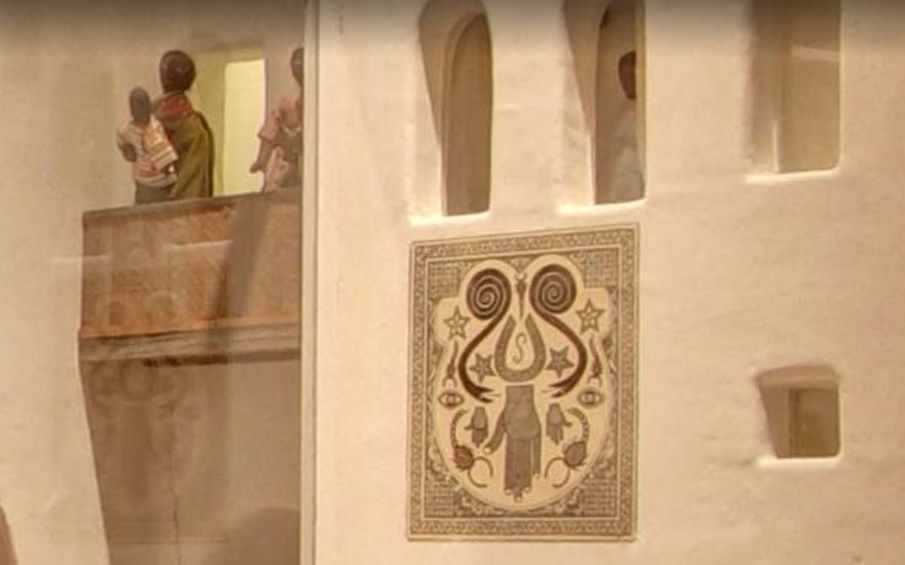 Hamsas reappear in Multiple Visions' main exhibit hall, where Girard's Moroccan marketplace set includes a miniature tile that has a hamsa, eyes, flowers and scorpions painted on it. To the side of the marketplace scene is a simple wall with a black and white painted tile featured prominently, also simply painted in black and white with a hamsa, snakes, birds, eyes and scorpions on it. Interestingly, Girard may have placed the large black and white tile upside down as the Hamsa should be placed with the hand upright, palm out, as if in prayer, though Hamsas worn on necklaces as pendants are upside down. 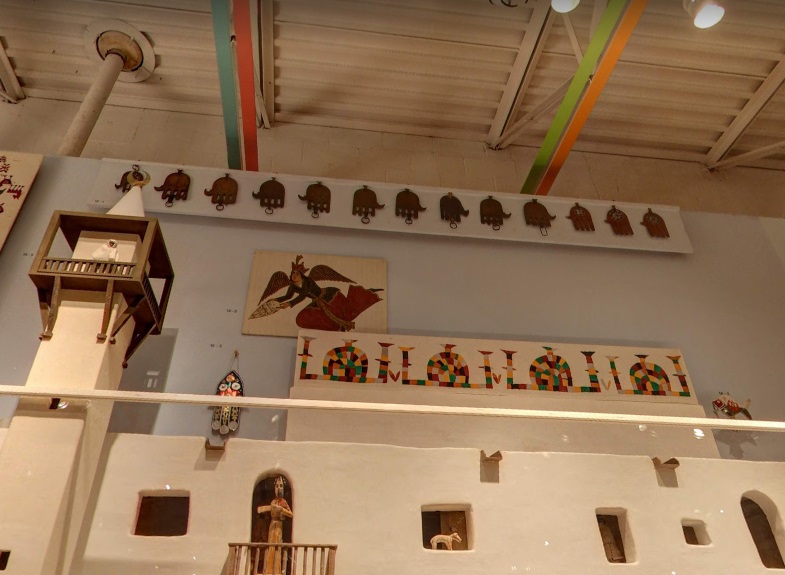 Above the marketplace scene, hung high, is a row of thirteen Hamsas that are from old Jewish synagogues in Morocco. A few of them have circular designs cut out in the center of the Hams indicating protection against the evil eye. They are very simple in style and probably are older than the other Hamsas in his collection. Oil lamps were hung from these Hamsas by long chains. Girard placed them in a beautiful row, repeating pattern and symmetry as was his design style. These are definitely placed upside down, from photos I have viewed of this type of oil lamp. Whether this is intentional or not, it is still effective design.

Doris Francis states in her book, Faith and Transformation, "Henry Glassie puts religion at the center of Girard's permanent exhibit...,an insight by the imposing baroque cathedrals that dominate Girard's village scenes." And we see that with the collection of Hamsas and Girard's placement of the collection in the entryway, he found the sacred in the small objects that were utilized in the everyday lives of people, the essence of folk art.

Leah Lewin Gibbons came to New Mexico in the early '70s to study art education and receive a Master’s degree at the University of New Mexico. She has lived in New Mexico ever since, awed by the beauty and spirit of the land. She raised her family, three daughters, in Santa Fe. She has taught art and was an early Childhood Educator and Director of a Santa Fe preschool for many years. She retired a few years ago and has been exploring the arts, as well as volunteering as a docent at MOIFA.