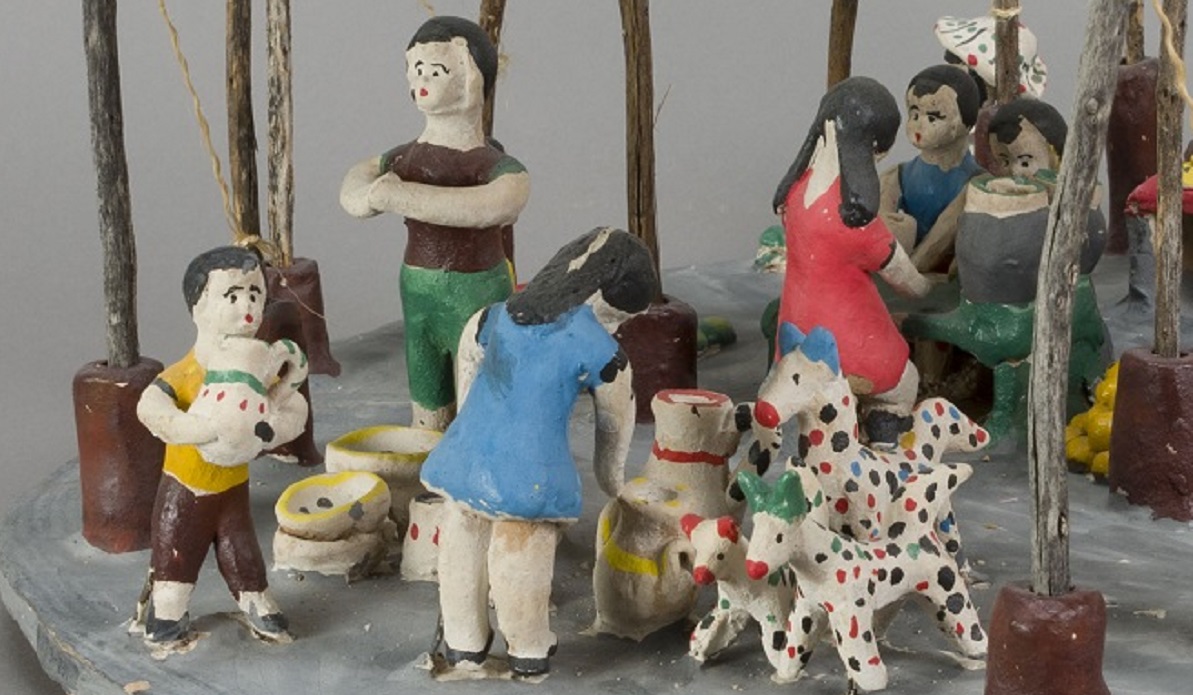 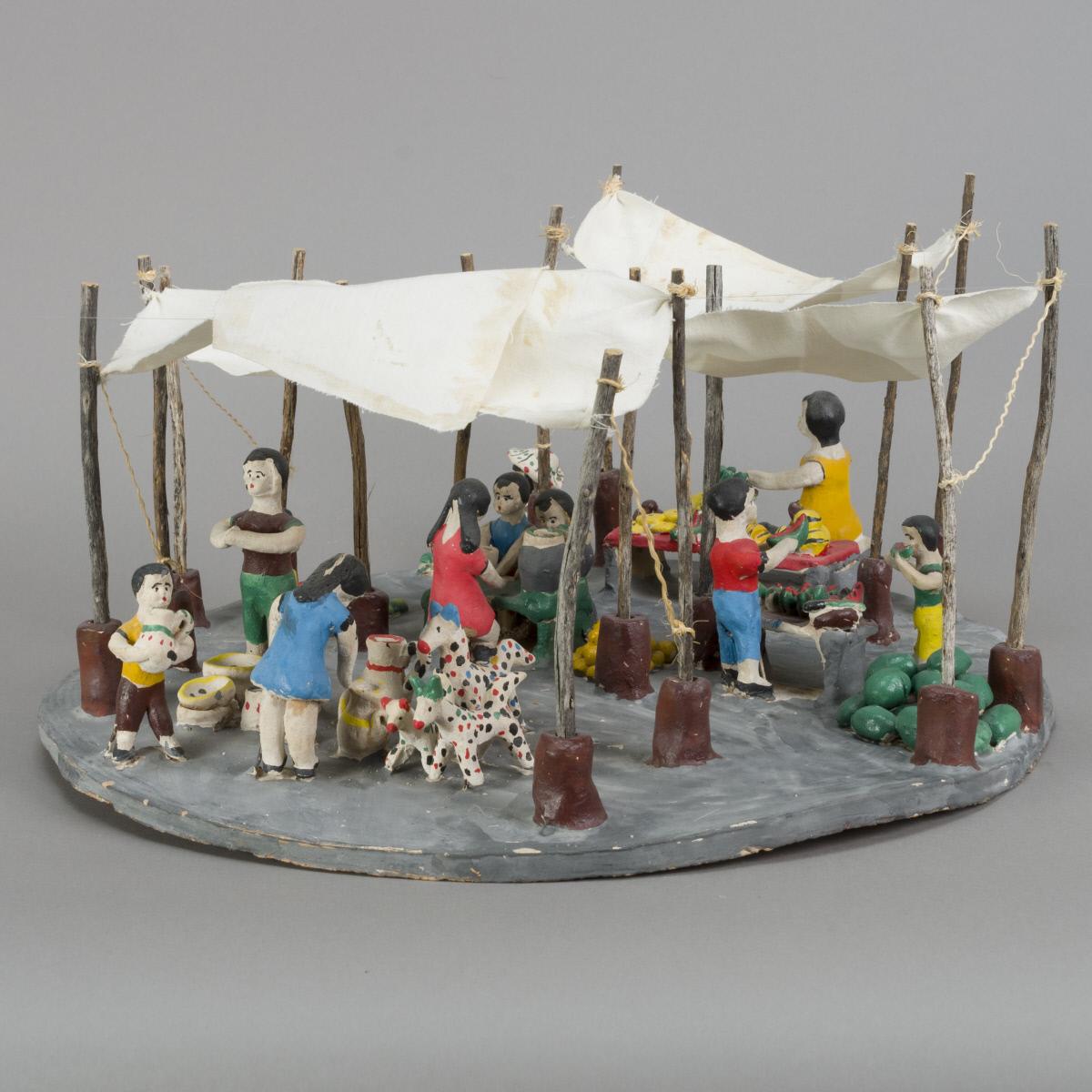 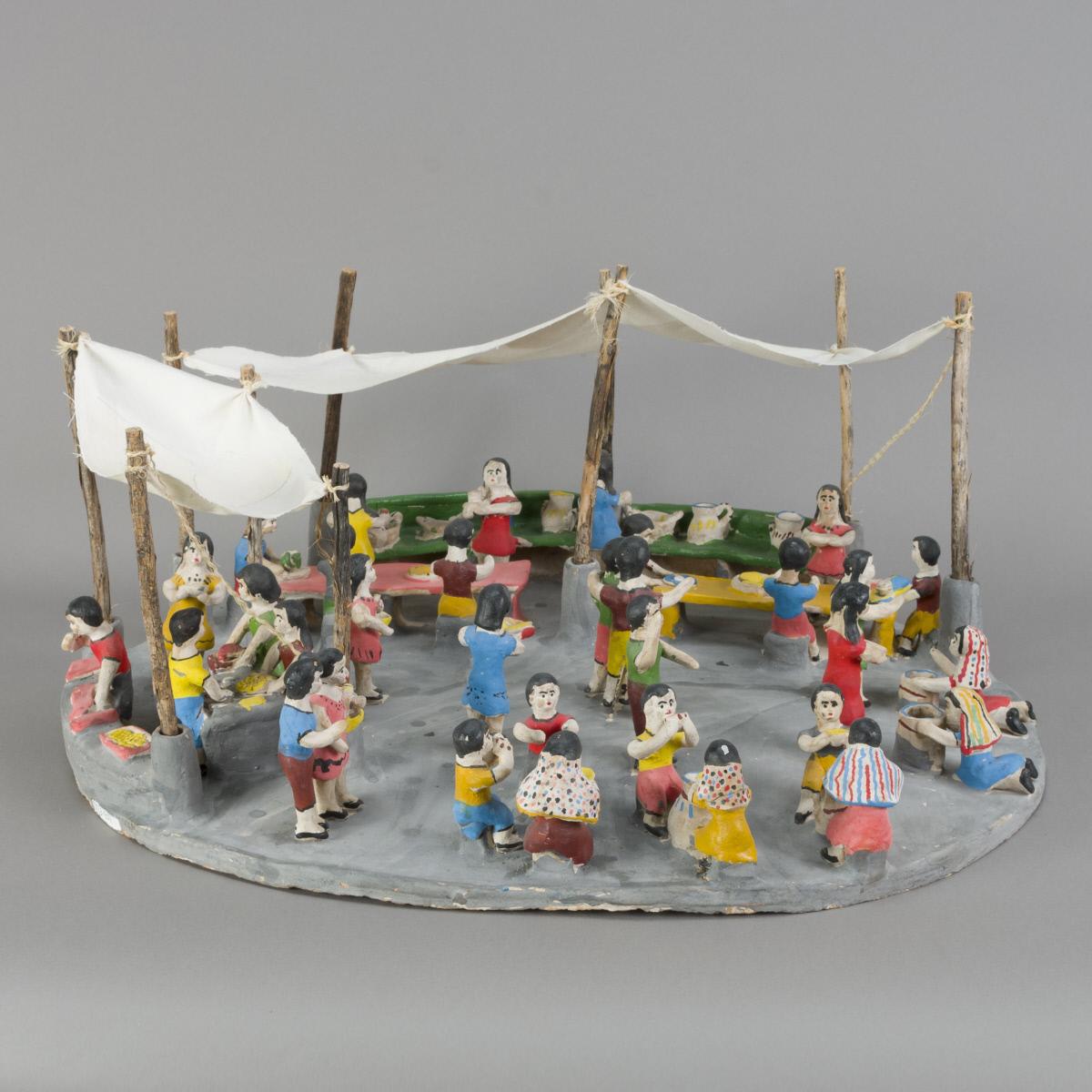 An artist who lived and worked in Acatlán de Osorio in Puebla, Martinez created market scenes that echo the large Multiple Visions market, a favorite of mine. For me, market figures resemble actors onstage, captured in clay or wood, theatrically performing everyday life. Most of Martinez’s market-goers have completed their purchases, pausing for refreshments with others on similar errands. The juxtaposition of figures implies dialogue, conversations between vendors and customers. Market-goers and sellers become both actors and spectators, engaging in dialogue with each other, simultaneously watching the interplay between others in a public space reminiscent of a theatrical set. Representing actual marketplaces, Martinez’s market scenes are little theatres, depicting local customs and culture, and documenting the migration of food from one culture to another.

Markets are among the oldest community institutions. Historical records locate markets in ancient Mediterranean civilizations and the Arabian peninsula; archeological ruins in Pompeii and Herculaneum reveal the centrality of marketplaces to ancient life. Colonial records from the Americas note significant Mayan and Aztec marketplaces. Markets, an element of daily routine in many communities, are sources of sustenance for local tables, venues for exchange of services and goods, social hubs and traditional gathering spaces.

Like real markets, folk art market scenes both preserve community food practices and record the impact of globalization. The fruits, vegetables, and animals that Martinez includes in his market scenes reveal the history of the world through the journeys of foodstuffs and foodways, documenting the development of our global food community. Martinez's market is Mexican, but oranges are native to tropical Asia, watermelon is African, and goats arrived in the Americas in the 1500s. Southeast Asian bananas came to South America with explorers and missionaries. Centuries after Europeans arrived in the Americas, these food items are common in Martinez's market. A Bolivian piece from MOIFA's online collection provides another colorful example of the mingling of fruit from all over the globe in one market stall featuring indigenous produce (squash, onions, avocados, bell peppers, tomatoes) beside "imports" (oranges, cabbages, apples) that made the transatlantic journey. 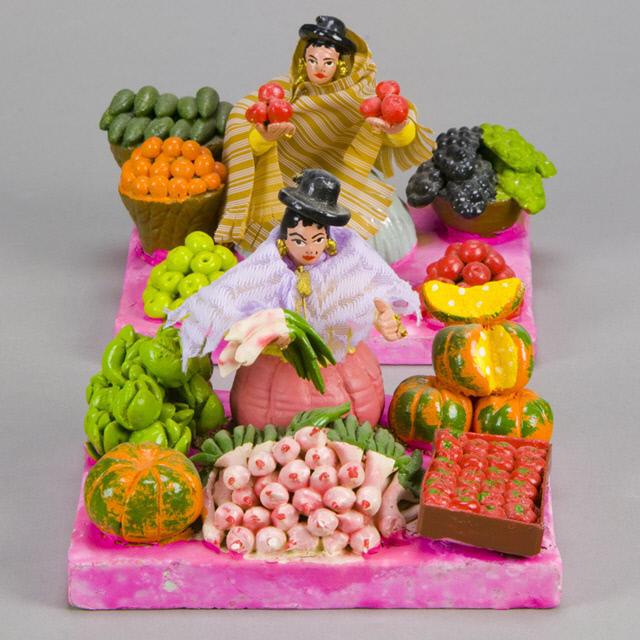 Italy’s food culture is likewise the product of global trade. Permanently displayed in Multiple
Visions, an Italian ceramic sculpture exemplifies how food travels across geographies. A Neapolitan market vendor invites customers to sample his watermelons (originally African). At the vendor’s right is a lemon-festooned cart, adorned with a painting of the Bay of Naples, suggesting that the lemons are probably sfusati d’Amalfi, local lemons that developed from the first lemons carried to Italy by Arab traders. 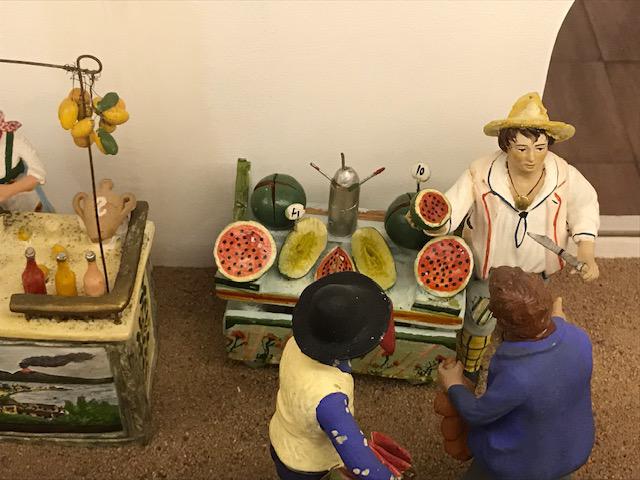 Why are we so attracted to markets? Because markets seem somehow familiar? Because markets are so lively? Or because we are all people watchers? In graduate school, my playwriting professor commented that public spaces—bars, restaurants, markets—are natural theatre sets. To this day, I seek the drama in markets where vendors are on stage constantly, singing, gesturing, acting for an audience—the customers who might be persuaded to buy. As “set designers”, these vendors stage their dramas by ornamenting their spaces with images and colorful designs, curating and arranging items to entice spectators. Now while international travel is impossible, I visit MOIFA’s online market scenes, imagining that I’m at Chatuchak or La Boqueria, even La Acocota in Martinez’s Puebla.

Through his toy theatres, Alexander Girard provides clues to approaching the markets in Multiple Visions, and the online collection. Above the toy theatres in the Girard Wing are the words, “Tutto il mondo e paese” or “All of the world is hometown.” Like toy theatres, market scenes are vignettes of people performing hometown rituals on the market stage, buying and selling, making tortillas, squeezing lemons, cooking and eating, gossiping, relaying news, playing, napping. They remind me of Santa Fe Farmers Market—and of other markets in other cities. And every time I visit the market scenes online, or visit a Multiple Visions market in person, the curtain rises on the next act in the great drama of everyday life.

Edelma Huntley moved permanently to Santa Fe in 2016, becoming a MOIFA docent in 2017. She has been on the Friends of Folk Art Board since 2017, and has just completed a year as Board Chair. In another life, she was the chief research officer and dean of the graduate school at a university in North Carolina, and then dean-in-residence at the Council of Graduate Schools in Washington DC. Her academic training is in Restoration Theatre; but her current research interest is food as folk art. She always visits markets first in the places to which she travels.

Attlee, Helena. The Land Where Lemons Grow: The Story of Italy and Its Citrus Fruit. Countryman Press, 2015.