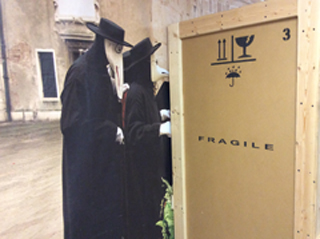 Deep in the shadowy vaults, the Museum’s underground storage twists and turns in strange passageways with even stranger objects. A wall of masks, a row of bright garments, or clay figurines peer after you as you walk by. When I found myself in the dark, concrete room with the low dangling light bulb I knew I had gone too far. ‘I should have known,’ I thought to myself, ‘you take a left after the mural depicting the doctors of the black plague.’

Down where the ever-burning Santa Fe sun cannot reach, objects lie under florescent lights and encompassed by impregnable stone catacombs. Strange curators with strange devices for observations shuffle by, some wielding tape measurers and sterile white gloves, moving objects in a hyper-sensitive trance of delicacy. Every so often, objects are carefully chosen from their eternal slumber, painstakingly christened and positioned, and then they are unrobed for the eyes of the visitors once again as a witness to the light of day.

Every curator is their own wizard brandishing the powers of assembling the various colorful and peculiar folk art objects into a semblance of order and comprehensibility. As a work study student, many times I find myself to be the bumbling assistant to these folk masters of the tri-powers of history, culture, and art. Many times I have witnessed them reciting ancient chants for good fortune by memory or dancing and singing to flamenco guitar in the lunch room.

Although their passion for humanity, respect for art, and fanaticism for educational and entertaining exhibits can be overwhelming at times, it all pays off when the exhibit finally opens and the community responds in excitement and curiosity. Just like when Flamenco opened, much of the community responded with unique, personal investments in the history which reflected the spirit of their own Santa Fe. So to with Sacred Realm, the community reacted in one unified gasp of shock, laughter, and joy at the exhibit opening during spectacles such as the lion dance. Overall the Museum and the curators find a way to cast new shades of mystery and intrigue on old objects. This mystery is most important and has the power to inflame curiosity in any visitor, which echoes in the entire community. And by community I also mean the world.